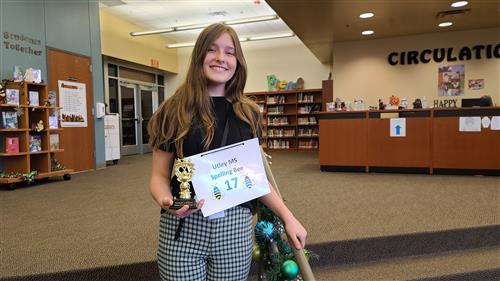 Phoebe Ishmael has participated in school spelling bees for the past four years and has won her school bee every single year!

When asked why she signed up for the bee in the first place, Phoebe said, "In 4th grade, having my parent's encouragement, I signed up just because I wanted to see how I would do. The competition was open to 4th-6th graders at my school, and I won! I kept entering each year to see how far I could go. I have advanced to the district bee every year, and I was the runner-up last year. I'm excited to see how I do this year!"

To prepare for the bee, Phoebe has her parents call out words one page at a time. "The study packets are large, but this way we slowly go though the packet, and it's not overwhelming," she says of the words. "I spend an average of about 45 minutes every night going over words in the four to five weeks leading up to the bee."

Phoebe also believes her reading habits help with her spelling, "I do read a lot and think it helps me because seeing words over and over helps familiarize me with them and causes me to learn their spelling and meaning."

Mrs. Ishmael, Phoebe's mother, discussed her feeling about the spelling bee as well, "I actually look forward to it each year! I was also involved in spelling growing up and enjoyed it. My mother used to practice with me the same way I do with Phoebe. We make it fun, and it always seems to be filled with giggles about strange, not often heard words. We learn new words together every year, so she keeps me on my toes and learning too! We are so proud of her accomplishments and winning streak! It's exciting to see her keep striving to get better and better!"

To help Phoebe mentally prepare before the bee, Mrs. Ishmael says, "We encourage and support her of course, but also remind her to take it slow and use the tools available to her during the bee, such as part of speech, definition, and usage in a sentence, to give her context and spell the word correctly."

We can't wait to see how Phoebe does in the district bee!