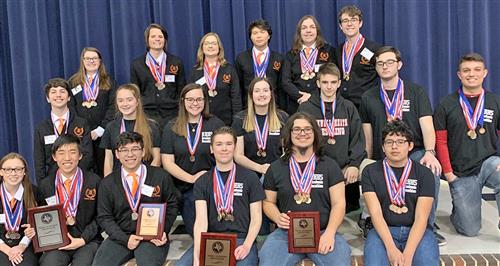 Congratulations to these students and good luck at the state meet in San Antonio.

The Rockwall HS AcDec team became the Region X Large School Champions and finished with the second overall score in the region by only 200 points out of 48,000.

In all, team took home 40 medals in individual events and tied for third place in the Region X Super Quiz event.

In the math category, six of the decathletes received medals for placing in the top five.  Andrew Mendoza was recognized for his essay along with Hayden Petruzzi for his interview.

Halley Wheeler received a medal for her speech.